Bulldogs take down Eagles In physical encounter to go 2-0! 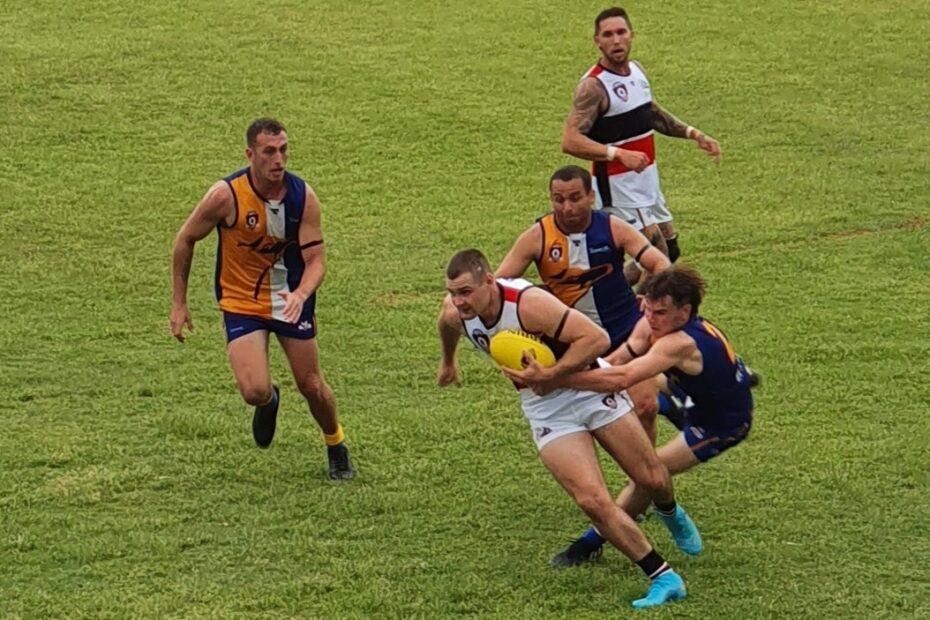 Brothers Bulldogs Senior Men have continued their perfect start to the 2022 AFL Wide Bay season with a hard fought victory in the “Sugartown Showdown” against The Waves Eagles at Brothers AFL Complex.

The match started with a minutes silence in honour of Teena Brice, wife of Craig Brice, the General Manager of Marquis Macadamias who have been long-term sponsors of the AFL Wide Bay Competition.

With drizzly, overcast conditions the game was always going to be tightly contested and both teams came out firing in the first quarter with the Dogs taking a slender 6 point advantage into quarter time (18-12).

The Bulldogs took control in the second quarter dominating the contested footy, and adding 2 goals whilst keeping the Eagles scoreless to take a 32-12 lead into half-time.

They continued the momentum in the third quarter with Brennan Dempsey & Tristan Taylor kicking goals from outside 50 and Waves recruit Cody Woodrow finishing out the quarter in style with a fantastic goal on the run to make the score 52-18 at 3/4 time.

The Eagles came out firing in the last quarter kicking 2 quick goals to bring the margin back to 22 points. However, the Bulldogs steadied with a goal of their own to seal victory by 30 points.

Coach Brad Grogan was delighted with the team performance, highlighted by 8 different goal kickers on the afternoon.

What a gutsy effort from our Brothers Bulldogs senior women against an undefeated Waves Eagles team. In slippery conditions, contested ball and some very physical tackles were the order of the day. A Mia Wochnik goal late in the 2nd quarter, and a goalless 3rd quarter from either team had Bulldogs players and supporters up and about sensing an upset was on the cards. However, the Eagles steadied with a couple of goals in the final quarter taking the final margin to 12 points.

Coach Felicity Tankey could not have been prouder after the game. “The ladies are all improving each week, I couldn’t ask for more than they have already been giving me. Bring on the Bears in 2 weeks time.”

Assistant Coach Mark Mason backed up Felicity’s sentiments. “So proud of you all for today’s efforts ladies. The desperation attacking the footy to win the contest, to keeping running to the next contest, the smothering of their kicks for goal & in general play, the loud encouragement and positive talk, they are all things essential to building an enjoyable team environment.”

The first match of the afternoon was also a tightly contested affair. Both teams had opportunities, with the Eagles taking their chances in the first 3 quarters to take a 24 point lead into 3/4 time. The Bulldogs found their grove in the final quarter, however a few skill errors cost them with the Waves holding on for a 14 point victory. Coach Gary Browne was happy with the performance, “we really gave it to them and left them surprised, our supporters were happy with our effort and there is a lot of promise with good things to come”, he said.