Bombers fly up over Bulldogs to continue unbeaten run! 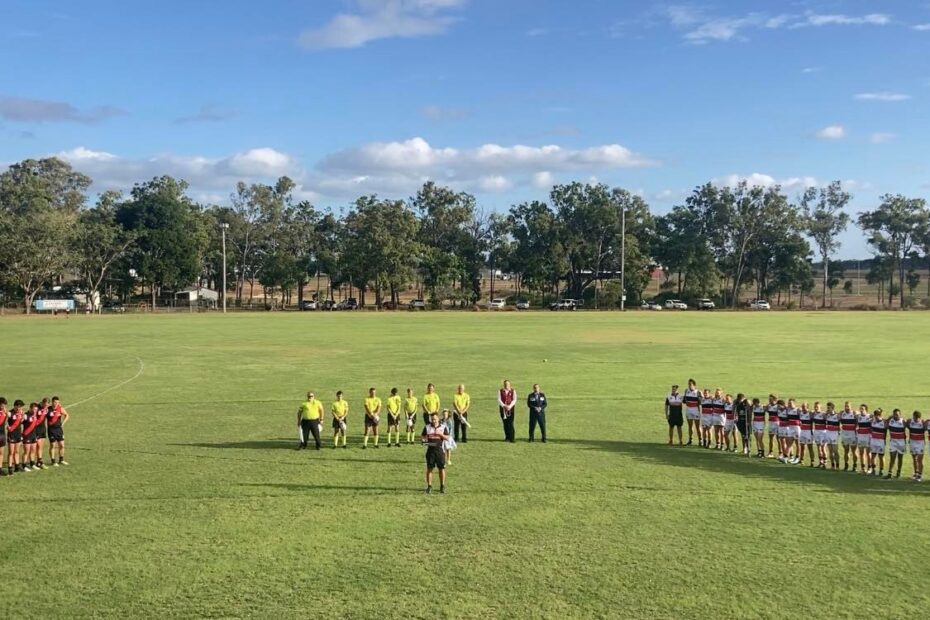 Hervey Bay Bombers have continued their unbeaten run in the Marquis Macadamias AFL Wide Bay Men’s competition with a hard fought 11 point Anzac Round victory over the Brothers Bulldogs.

The Bombers dominated the centre clearances early and transferred this to the scoreboard. Some slick ball movement kicking into the strong breeze resulted in 4 goals and a 17 point quarter time margin. (24-7)

The Bulldogs responded in the second quarter as the intensity from both teams went to another level. In a gripping contest, fitting of the occasion, both teams went goalless as the pressure lead to rushed kicks and turnovers. Half time score – Bombers 4.5-29 to Bulldogs 1.3-9.

After some strong words during the half-time break, the Bulldogs lifted to another level in the third quarter dominating the contested footy for the majority of the quarter. However, they failed to take full advantage as the Bombers defence held strong with intercept marks from both Cameron Baker & James Hickey cutting off promising attacks on numerous occasions. 3/4 time score – Bombers 5.5- 35 to Bulldogs 3.5-23.

The turnovers and missed chances in the third quarter would come back to haunt the Bulldogs, as the Bombers used the breeze to advantage early in the 4th quarter with quick ball movement resulting in two goals and a 25 point margin. To the Bulldogs credit they didn’t give up, with Tristan Taylor and Harry Hodgson linking up for multiple clearances in the final 10 minutes, resulting in the margin being reduced to 10 points with less than 5 minutes remaining. However, the Bombers steadied and held on in fading light for a well-deserved win.

Other results from a massive day of footy!

Congratulations to our Brothers Bulldogs Under 12’s who had a nail-biting 2 point victory to start the day against Hervey Bay Bombers Black. The game was heavily influenced by a strong wind with the Bombers coming home strongly in the final quarter after trailing by 22 points at 3/4 time. The Bulldogs defence remained resolute as the Bombers pushed hard for victory in the final two minutes.

Our Under 14.5’s had a tough start to season 2022, but never gave up against a very classy Hervey Bay Bombers outfit that will be very hard to beat this season. With many of our players stepping up from Under 12.5’s, it was certainly a learning experience for many of the players against an older, more experienced opposition.

It was fantastic to see the return of the AFL Wide Bay Under 17.5 Youth Boys competition, with our Brothers Bulldogs boys holding their own against a highly fancied Bombers side. After not fielding a team in 2021, it’s so exciting to see the boys out there giving it their all. A big thank you to Mark Mason for his recruiting efforts which were pivotal in forming the side. We look forward to watching them learn and grow under Dylan Keam in season 2022.

The Brothers Bulldogs reserves improved again, only to fall 7 points short to the Maryborough Bears. Congratulations to the Bears who look to be building a competitive side which only bodes well for the future of the AFL Wide Bay competition.

What a great win for our senior women’s team against a gallant Maryborough Bears side. Under coach Felicity Tankey the ladies have continued to grow in confidence every week. Look out for them in 2023!

Also, a big thank you goes out to Mercia Griffies (aged 10) for her beautiful rendition of the Australian National Anthem and our bugler Darren Large from the Bundaberg Municipal Band.

Finally, thank you to everyone that helped out in some way on the day, with a special mention to Griffin Webb & Amanda Webb for their tireless work in the canteen over the past 3 home games.